This section of the project Memoria Presente: The Common Spanish Legacy in Italian and Latin American Cultures focuses on foods circulating between Italy and Latin America along the routes of the Spanish Empire, both in terms of culture (gastronomy) and preparation (cuisine).

These foods include the raw ingredients brought from the Americas (in particular the tomato), as well as dishes introduced or affected by the Spaniards’ cooking techniques, both those popular in Spain (marinating in vinegar) and those absorbed in the territories annexed after the overseas conquests (for instance, the cold-pressed chocolate preparation). A concrete example of the transnational nature of some of these foods can be found on this webpage describing the origin and circulation of the empanada recipe from Galicia in Spain to Chile, the Philippines and … Sicily. 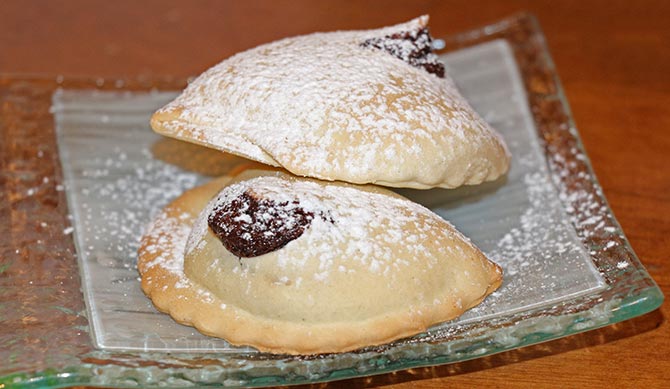 Whether introduced by the nuns to secretly feed meat to the monks traveling long distance to preach during Lent, or just to use the meat in excess from the hunting season at a time when refrigeration was not available, the mpanatigghi are one of the most obvious link to the Spanish cuisine (the name comes from the Spanish “empanadas-empanadillas”). They are also a quite original dessert for the unusual mix of ingredients. Very reminiscent of the savory empanadas, but essentially acting as a sweet pocket cookie filled with chocolate and a touch of meat inside, the ‘mpanatigghi are made in Modica still today (they have the unique quality of lasting long thanks to the use of the cocoa paste, whose vegetable fat makes for a natural preserver that prevents the meat from going rancid). Leonardo Sciascia mentions this delicacy in one of his books (La contea di Modica). For more information and the recipe see this webpage. Source info for picture above.

The photos were taken by the chef Annalisa Pompeo as she was preparing the mpanatigghi in her kitchen in Favara, Sicily. After making the dough with flour, lard, sugar and eggs and rolling it out into disks, she prepared the filling with cocoa paste, egg whites, finely minced beef, almonds, candied fruits and natural flavors. She placed a spoonful of filling on top of each circle and folded it into a pocket. After cutting a hole on the top and decorating the rim with a form, the mpanatigghi were ready for the oven. And, with a sprinkle of powdered sugar, then they were ready to be enjoyed. 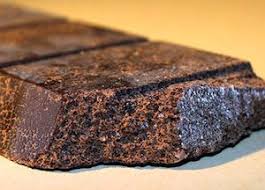 Aztec chocolate exported by the Spaniards to Europe reached Sicily in the 1700s. It was initially consumed as a hot beverage in the aristocratic circles. Today it is primarily produced for bars, according to the same old recipe, which is also used in Oaxaca, Mexico. The chocolate beans were originally cold-pressed on stone (metate) or wood slabs, where they melted at a low temperature and formed a paste. Today the paste is melted at that temperature (40-45 degrees), no fat is added to this type of chocolate, and its texture is quite grainy as the added sugar (of Arab origin and thus introduced in Sicily ) does not melt. Traditional flavors include cinnamon and vanilla in Sicily (in Mexico the traditional flavor was also the chili pepper). Today there is a wide variety of options in flavors in Modica, as well as the US where the product reaches primarily the Hispanic community but has gained attention beyond it. In Mexico and the US, the bars are primarily used for the preparation of the hot chocolate beverage, which is not common in Modica instead. See video linked to the event devoted to the history and preparation of the Aztec chocolate in Modica (April 2021): Italian version and Spanish version. For other materials see event’s webpage.

Previous
Next
Sicilian writer Leonardo Sciascia extolls the qualities of this primordial chocolate and links to Spain: “Altro richiamo, per restare alla gola, é quello del cioccolato di Modica a quello di Alicante (e non so se di altri paesi spagnoli): un cioccolato fondente di due tipi – alla vaniglia, alla cannella – da mangiare in tocchi o da sciogliere in tazza: di inarrivabile sapore, sicchè a chi lo gusta sembra di essere arrivato all’archetipo, all’assoluto, e che il cioccolato altrove prodotto – sia pure il più celebrato – ne sia l’adulterazione, la corruzione.” / “Another connection, to remain focused on the palate, is that of the chocolate made in Modica to that made in Alicante (and I don’t know if in other Spanish towns): a dark chocolate of two types – vanilla, cinnamon – to be eaten in chunks or melted in a cup: of unrivaled flavor, so that those who taste it seem to have reached the archetype, the absolute, and that the chocolate produced elsewhere – albeit the most celebrated – is its adulteration, corruption.” Photographer and writer Ferdinando Scianna provides a poignant rendition of the even larger geography of this chocolate: “From Oaxaca to Modica, a recipe and a taste that have traveled centuries and oceans unscathed.” Whether taken to Peru at the time of the Conquista when Italian colonizers from Liguria joined the Spanish ships since Genoa was under Spanish imperial control in the 1500s or imported by Italian economic immigrants in the mid-1800s, the tallarines verdes (green noodles) are essentially pasta with pesto. Like any migratory phenomenon, the recipe was subjected to adaptations given the lack of original ingredients: basil was substituted by spinach when necessary, parmesan was too hard to find and gave way to queso fresco, while pecans took the place of pine nuts. Finally, the dish was served with meat on the same plate and today the usual combination is tallarines verdes con bistec or tallarines verdes on pollo frito. See two sources: colonial origin and Great Migration origin.

MENU OF ITALIAN DISHES WITH SPANISH INFLUENCE (with a special emphasis on Sicilian dishes)
From the wide set of dishes introduced or influenced by the Spaniards, we* are proposing a menu that features the most unique dishes, i.e. dishes that are considered quintessentially autochthonous while in reality they are the result of cultural cross-pollinations that that the “Memoria presente” project is intent on discovering and illustrating.

‘a pasta ‘ccu l’agghia (pasta with pesto from Trapani)

This page was created as part of an NEH (National Endowment for the Humanities) grant, and with the logistical support of Montclair State University. For information about the NEH Faculty Award linked to the Memoria Presente project, see link.