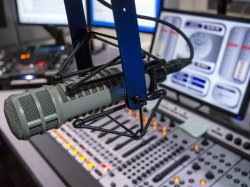 The Voice of Montclair State University

Tune in to WMSC FM

WMSC-FM features a variety of programming including alternative music, news, sports, talk and special features.  It is operated largely by University students with support from  the School of Communication and Media’s  professional staff.  The station broadcasts locally at 90.3 MHz and worldwide via www.wmscradio.com.

Students in the School are especially encouraged to become involved with WMSC to gain hands-on experience with radio broadcasting and streaming as communication mediums.

Additionally, WMSC welcomes all Montclair State University undergraduate students to join the organization. There are several opportunities for on & off air positions. Training is provided by our staff.

Listen to WMSC shows on SoundCloud

To learn more about the  Radio Station Facility and a history of WMSC, go to:

On this episode of Media Download, we pause from the hurly burly of today’s media world to celebrate the one-hundredth anniversary of the birth of the late filmmaker, stage director, actor and radio personality, Orson Welles. Almost 77 years to the date, the broadcast of “The War of The Worlds” changed media forever.