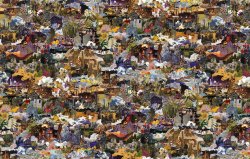 Critical Made in Italy Part 4: Art, Industry and Public Spaces

This fourth part of the Critical Made in Italy Series, designed and initiated by the Inserra Chair in 2016, looks at the complex and fascinating relationship between art, industry, and public spaces investigating in particular the aesthetic and political implications of the act of turning a work of art into a fine design product or a piece for broad appreciation in public spaces such as subway stations. The conversation will focus on the combination of creation and manufacturing in the Italian context with references to the U.S., and will address such questions as: Why and how do artists develop their vision in contact with for-profit companies as well as public institutions? In the former case, does their art remain a political instrument of humanistic resistance, when the artist is socially engaged, or does it fall prey to market drives? Does it move to the private sphere of consumption or can it still have a public impact? In the latter case, what processes of analysis and comprehension does art prompt when displayed in public places used by large amounts of people, often in motion?

More in general, what opportunities of artistic growth, does the combination of art, industry and public arenas offer to creative minds in terms of personal expression, achievement of collective needs, as well as financial stability?

Francesco Simeti was born in Palermo (Italy), studied at the Academy of Fine Arts of Bologna, and is now based in Brooklyn. His versatile art spans from drawing to painting and ceramic sculpture. A keen reader of the relationship between human beings, flora and fauna in an increasingly hyper-technological and contaminated world, Simeti is intrigued by the tension between seeing and hiding within intricate visual spaces richly filled with quotations from Italian Stile Liberty (Art Nouveau) decorations to images of contemporary global affairs.

His reflections on violence, pollution, desensitization and alienation are delicately addressed in works of art that are simultaneously soothing and playful. He has collaborated with several companies both in Italy and the U.S. for the creation of interior design elements such as wallpapers, curtains, and screens (Moroso/Metamorphosis, Maharam, Flos, Alcantara) as well as textiles for fashion lines (Miroglio/ Metri d’arte, Mother of Pearl). Simeti is also regularly involved in public art projects in which he engages with his classic themes – the natural environment and technology – in spaces such as subway stations (MTA in NYC), state offices (Health Department in Oregon), and even abandoned villages (Civita di Bagnoregio with Airbnb).

Lester Burg’s early experience was in Los Angeles for the Downtown and Hollywood Redevelopment Projects and programs that included public art, urban design and the conversion of buildings to art and performance spaces. He authored the Hollywood Arts Plan, formed the Hollywood Theatre and Cultural Advisory Committees. In West Hollywood, CA he served as the City Art Coordinator, and wrote their Public Art Guidelines. In 2005, he joined New York’s Metropolitan Transportation Authority (MTA) Arts & Design where he is Deputy Director.

A&D has 50 active public art projects and over 300 installed permanent works throughout the transit system and oversees music, poetry and digital/photography programs. Burg has managed permanent art projects, from proposal to installation, ranging from neighborhood scale to new subway stations in Manhattan. He has worked with such artists as Xenobia Bailey, Chuck Close, Sarah Sze, Vik Muniz, Jean Shin, Yoko Ono and Firelei Baez on permanent installations. Among Italian and Italian American artists, he has collaborated with Francesco Simeti and Stephen Miotto. Burg is Chair of the Public Art Network Council of Americans for the Arts.

Nicholas Savage is the Image Specialist at Maharam, a leading provider of textiles to architects and interior designers, embracing a range of disciplines, from product, graphic, and digital design to art and architecture. He received his BFA from Virginia Commonwealth University and studied painting and art history at Lorenzo de’ Medici (Florence, Italy). With over twenty years of experience as a digital retoucher, photographer, and artist, Nicholas enlists a variety of techniques and programs to create high-resolution imagery for digital print.

Throughout his ten-year partnership with Maharam, Nicholas has worked on a variety of projects including the Maharam Serpentine Galleries Wallpaper collection and Maharam Digital Projects, which are print-on-demand, uneditioned, large-scale digital wall installations. He has worked closely with Cecilia Alemani, curator of the High Line, FRIEZE New York, and Art Basel, and Massimiliano Gioni, director of the New Museum. Nicholas has collaborated with several contemporary artists ranging from Ai Weiwei to Francesco Simeti, and including Vito Acconci, John Baldessari, Maurizio Cattelan, Paola Pivi, Robert Lazzarini, and Fred Tomaselli.

Livia Alexander is a curator, writer, and Chair of the Department of Art and Design at Montclair State University. Her work examines the relationship between art infrastructure and artistic production, urbanity, cultural politics of food and art, and contemporary art from the Middle East and Southeast Asia. She has curated and directed numerous art and film programs, exhibitions and events at renowned venues world-wide, including the Museum of Modern Art in New York, Tate Modern in London, the Brooklyn Museum, the Lincoln Center, and many more.

A creative entrepreneur, Alexander has set up pioneering institutional frameworks and dynamic knowledge bases in the U.S, the Middle East, North Africa and Europe to nourish and sustain artistic practice. Her award-winning scholarly writing has appeared in the Journal of Visual Anthropology, Framework, MERIP, and as book chapters and catalog essays. She regularly contributes to Hyperallergic, Harpers Bazaar Art Arabia, ArtsEverywhere, and Art Africa. Her current research and curatorial practice is centered on the built environment at the nexus of urban place-making and social practice, with a current thematic residency, “Dirt & Debt”, which she is co-curating with collaborator Jane Philbrick at Residency Unlimited in New York.

Teresa Fiore is the Inserra Endowed Chair in Italian and Italian American Studies at Montclair State University. The recipient of several fellowships (Fulbright, De Bosis, Rockefeller) and holder of visiting positions at Harvard, NYU, and Rutgers, she is the author of Pre-Occupied Spaces: Remapping Italy’s Transnational Migrations and Colonial Legacies (2017, recipient of 2018 AAIS Prize and 2019 MLA Marraro Honorable Mention) and the co-editor of the section “Italy and the Euro-Mediterranean ‘Migrant Crisis’” in the Journal of Modern Italian Studies (2018).

Her numerous articles on migration to/from Italy linked to 20th- and 21st-century Italian literature and cinema have appeared in Italian, English and Spanish in both journals (Annali d’Italianistica; El hilo de la fabula; Diaspora; Journal of Italian Media and Cinema Studies) and edited volumes (Postcolonial Italy; The Routledge History of Italian Americans; and New Italian Migrations to the United States, Vol. 2). On campus, she coordinates programs on Italy’s transnational culture (montclair.edu/inserra-chair), including various events about Art and Architecture and activities about Italian, Business and Industry, such as the Critical Made in Italy series.

Sharon Waters is the Interim Director of the Montclair State University Feliciano Center for Entrepreneurship, where she has also worked as Program Manager since 2013. She holds a Master’s in Journalism and Mass Communication from NYU. At the Center, she oversees marketing, communications and events: notable among them, the internationally renowned Women Entrepreneurship Week for which she functions as manager. She also counsels students about curriculum and entrepreneurship opportunities since she has taught classes such as “Entrepreneurial Mindset and Innovation”), developed and supervised co-op internship courses in the School of Business, and served as a member of the Promise Prize selection committee for an annual $5,000 student award.