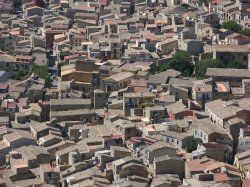 If You Saw What I Saw in Corleone, A Town of Mafia, Anti-Mafia and Mafia Tourism

Corleone, a Sicilian town in the province of Palermo, is the birthplace of several fictional characters in The Godfather, and the acquired last name of its protagonist Don Vito. It is also the place where a number of prominent mafiosos were active during the 1980s and ’90s, and where a courageous anti-mafia culture also established its presence – the papers of the 1986-92 Maxi-Trial against mafia bosses such as Riina and Provenzano are kept in a local center. Corleone is a place of saints and devils, of victims and executioners, of stereotypes and reality. It is a relatively small locale of worldwide fame. Or a reality used as a metaphor, to quote the Italian novelist Leonardo Sciascia. Yet, Corleone is also a place of common people who have to play the role of actors in front of an audience of demanding tourists as if their town were a permanent film set.

During a residency in Corleone, Maria D. Rapicavoli developed a multi-part project – “If You Saw What I Saw” (see full description) – consisting of a series of videos and photographs (2008-11). In investigating the real and imagined narratives of both locals and visitors (the mafia guide, the anti-mafia archive founder, random residents, American tourists) in a place replete with stereotypes, Rapicavoli has represented Corleone from different points of view in an environment that often denies the existence of Mafia, yet exploits its fictional rendition as a commodity as part of thematic tourism.

Rapicavoli’s presentation will illustrate her multi-part art project, while intertwining it with clips from The Godfather series’ films set in Corleone, which ironically were not shot in Corleone but in other areas of Sicily. A Q&A will follow.

Maria D. Rapicavoli was born in Catania (Italy) and lives and works in New York. She received her B.A. from the Academy of Fine Arts in Catania in 2001, her Master In Fine Arts from Goldsmiths University of London in 2005, and was a fellow in the Whitney Independent Study Program in 2012. She was artist in residence at the Lower Manhattan Cultural Council Swing Space Residency Program in NY (2013), the International Study and Curatorial Program in Brooklyn (2014), and Abrons Arts Center in New York (AIRspace program, 2015). Rapicavoli has won a Postgraduate award in Arts and Humanities by AHRB in London (2004), the Renaissance Prize Award at the Italian Cultural Institute in London (2008), the DE.MO/Movin’UP grant in Italy (2011) and the “nctm e l’arte” award (2013). Currently she is Artist Member at the Elizabeth Foundation for the Arts in New York.