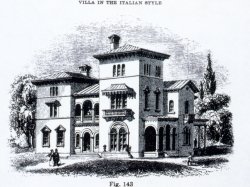 From Montclair to Montechiaro: Discovering Italy in the Local Architecture

Montclair’s transformation, from a bucolic country retreat known for its clean air and apple orchards into one of the first and finest commuter suburbs of Manhattan, is due to the arrival of the railroad in the 19th century. This allowed local captains of industry, who worked in New York City, the opportunity to live and unwind in the shadow of “First Mountain,” all within an hour’s commute of the city. Locally and nationally known architects constructed houses, commercial buildings, and churches using Italian inspired architectural elements.

Join our expert tour guides, as they reveal the multiple layers of Italian connections in the architectural treasures of Montclair, re-baptized Montechiaro for this special occasion.

Beginning with the concept of the American suburban “villa” introduced by A. J. Davis and based on Italian architectural concepts, to the buildings inspired by the theories of Vitruvius and Palladio, the tour contextualizes the development of the township of Montclair. In this context, interestingly, the evolving town offered opportunities to Italian immigrants, who settled in the Fourth Ward, to utilize their skills, learned in Italy, to benefit Montclair with their expertise in the building arts. The tour encompasses the diverse and beautiful Montclair landscape which includes grand houses as well as the working class Italian neighborhood of the Pine Street historic district.

Kathleen Bennett is an international scholar, lecturer and cultural advisor. She completed a graduate degree at the Cooper-Hewitt/Parsons/ New School in NYC with a thesis entitled The Rococo in Sicily. Extensive travel in England and Italy, including participation in the Attingham and Victorian Society summer school programs, fueled her interest in architecture and the decorative arts. She has spoken on diverse subjects ranging from English gardening, Sicilian architecture, and eighteenth-century Design Sources to a number of New York and New Jersey based groups.

Recently, she was the Art Education Director at TWLC, a tutoring program based in Far Hill, NJ, where she presented talks and created architectural study programs, based on her training as an Art Educator with a degree from Montclair State University. Currently, Bennett is the Chairperson of the Montclair Preservation Commission, which is a municipal advocate for historic buildings and structures in the township of Montclair. She has authored Montclair historic building and site reports for eligibility into the local historic register, relying on research journals, book and photos available in local depositories. Her research work on Sicilian subjects includes a catalog raisonne of Luigi Mayer, eighteenth-century vedutista, also known for his works on Sicily, and a project on the art of Robert Hawthorne Kitson, English painter who settled in Taormina at the end of the 19th century. While Bennett is not trolling through local and international libraries and archives, she explores the cuisines and culture of Sicily.

Frank Gerard Godlewski is an architectural designer, historian, and land use expert. The creative director of Fellsbridge Studio LLC for building renovations, he presently serves as Commissioner for the Borough of Caldwell Historical Preservation Commission and the Borough Historian Chair for Essex Fells, NJ. Born in Montclair, he attended Montclair Academy and MKA. He is a graduate of the Cooper Union School of Architecture and worked on a Dottorato di Ricerca in Architecture in Venice, Italy.

Fluent in Italian and French, Frank lived in Italy for 24 years where he worked in the Milan Studio of Master Italian Architect, Aldo Rossi, and participated with his own two projects in the 1985 Venice Bienniale of Architecture. Godlewski also worked for Vogue Italia, Elle Décor and Panorama. He has been involved in the business of restoration and planning for historical properties and curated cultural programs on numerous Italian national landmarks. He has lectured on culture, history and design at numerous venues (Montclair Public Library, Montclair Art Museum, the AIANY Architecture Center) as well as curated and presented exhibitions and cultural events for the New York Armory Arts Week and at the Princeton School of Architecture. Godlewski was granted the Township of Montclair Preservation Award in 2015 and 2018.

Teresa Fiore is the Inserra Endowed Chair in Italian and Italian American Studies at Montclair State University. The recipient of several fellowships (Fulbright, De Bosis, Rockefeller) and holder of visiting positions at Harvard, NYU, and Rutgers, she is the author of Pre-Occupied Spaces: Remapping Italy’s Transnational Migrations and Colonial Legacies (2017, recipient of 2018 AAIS Prize and 2019 MLA Marraro Honorable Mention) and the co-editor of the section “Italy and the Euro-Mediterranean ‘Migrant Crisis’” in the Journal of Modern Italian Studies (2018).

Her numerous articles on migration to/from Italy linked to 20th- and 21st-century Italian literature and cinema have appeared in Italian, English and Spanish in both journals (Annali d’Italianistica; El hilo de la fabula; Diaspora; Journal of Italian Media and Cinema Studies) and edited volumes (Postcolonial Italy; The Routledge History of Italian Americans; and New Italian Migrations to the United States, Vol. 2). On campus, she coordinates programs on Italy’s transnational culture (montclair.edu/inserra-chair), including various events about Art and Architecture and activities about Italian, Business and Industry.

Over the years, his repertoire has ranged from Renaissance and Baroque music to Classic and Romantic operas, oratorios and symphonic works; from German Lied to XXI century music, including many world creations. He has recorded more than forty CDs. In 2000 he began to study conducting, which since 2007 has become a parallel activity to singing. Since 1996 he regularly teaches in courses and seminars in Italy and abroad, and was invited to give Master Classes by such institutions as University of Southern California Los Angeles, University of Oregon, University of Melbourne, Academy of Music and Opera House of Tashkent etc.

Born in Baltimore, MD, David Witten received his early training at the Peabody Conservatory, and at the Rubin Academy of Music in Jerusalem. He earned his degree of Doctor of Musical Arts in piano performance from Boston University. At the Cali School of Music, Montclair State University, he is currently Coordinator of Keyboard Studies. Witten’s international career has included numerous concert tours in Ireland, Finland, Russia, Ukraine, Europe, Mexico, and South America. As the recipient of a 1990 Fulbright Scholar award, Witten spent five months teaching and playing throughout Brazil, and he is frequently invited back to give concerts and masterclasses. Closer to home, Witten’s performances have included solo appearances with the Boston Pops Orchestra, the Pro Arte Chamber Orchestra, and various chamber music collaborations with members of the New York Philharmonic and the Boston Symphony Orchestra.

Witten has also been active in contemporary music (Nicholas Van Slyck, Manuel M. Ponce, among others) and has recorded for several labels (Titanic Records, Musical Heritage Society, Marco Polo). His recent CD release last year on Albany Records presents piano music of Italian/Jewish composer Mario Castelnuovo-Tedesco (this composer’s busy career as a Hollywood film composer did not prevent him from adding significantly to the concert repertoire). Witten founded Soli Espri, a chamber trio based in Boston with clarinetist Chester Brezniak and mezzo-soprano D’Anna Fortunato, and Dúo Clásico with flutist Sue-Ellen Hershman-Tcherepnin. He is the editor of Nineteenth-Century Piano Music: Essays in Performance and Analysis (Garland Publishing, 1997), which includes his landmark analytical study of the Chopin Ballades.

Directions from NYC with public transportation:

Bus leaves PA every hour on the half hour and departs at Gate 20. Tickets: approx. $8,00/one way. 12:30 arrives at Montclair YMCA on Park Street at 1:00, from there Uber or Lyft to Van Vleck House & Gardens (alternatively 15 minutes’ walk).

NJ Transit Montclair-Boonton Line from Penn Station; however, limited service at the weekends