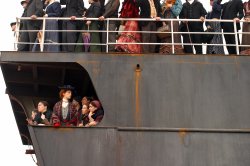 Through the Golden Door Then and Now: A Conversation with Actor Vincenzo Amato

A boat (over)loaded with fleeing people has become the most common image in today’s representation of migrants trying to reach the Golden Door of Europe, very often through Italy. Yet, this image is pre-occupied by that of 19th-20th-century ships carrying large crowds across the Atlantic towards the Golden Door of the U.S., including vast numbers of Italians. The story of this crossing from an Italian perspective has been told on the big screen – arguably for the first time – by Emanuele Crialese in his acclaimed film Golden Door/Nuovomondo (2006, winner of 3 David di Donatello Awards and a Silver Lion as a Revelation Film at the 2007 Venice Film Festival). The face of its unforgettable protagonist – Salvatore Mancuso, a Sicilian of poor means and big dreams – is that of a much beloved actor, Vincenzo Amato, whose expression of gentle defiance, sincere awe, and perceptive naiveté made Salvatore Mancuso into an iconic immigrant.

Amato played the role of another Italian immigrant in the U.S. in Crialese’s very first film, shot in NYC. His Once We Were Strangers (1997) is an equally unique take on the subject, with a protagonist – Antonio played by Amato – whose life as an undocumented immigrant in Manhattan reminds us that lack of papers is a much more transversal condition than that cast by today’s public debate in both the U.S. and Italy.

Vincenzo Amato’s visit to Montclair State University is a special opportunity to hear behind-the-scenes stories linked to the making of Crialese’s films about going through the Golden Door then and now, and to learn about Amato’s current and future projects on both sides of the Atlantic.

Vincenzo Amato was born in Palermo and moved to Rome after high school. He has lived in New York since 1993. He comes from a family of artists active in theater and music: he himself is an iron sculptor. Amato began acting after meeting and becoming friends with director Emanuele Crialese, who made him debut in the film Once We Were Strangers, and chose him again for his next film, Respiro. In 2007, Amato was nominated for a David di Donatello for Best Actor for his performance in Nuovomondo.* Since then Amato has played numerous roles in films and TV series both in Italy and the U.S., working with major film directors, including Antonio Piazza and Fabio Grassadonia, whose film Sicilian Ghost Story (2017), in which Amato plays the father of the young anti-mafia fighter Luna, was shown on campus on Dec. 2018.

*Note that the film is available via streaming for University-affiliated people through the Sprague Library.

New York Times Review (Critic’s Pick): “Those Tired, Those Poor: A Journey as Important as Its Destination” by A.O. Scott (2007).