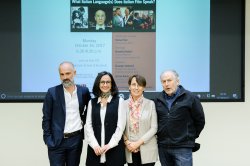 Critical Made in Italy Part 3: Cinema This is the third part of the “Critical Made in Italy” series, designed by the Inserra Chair in Italian and Italian American Studies in 2016 and inspired by a collection of essays edited by Daniele Balicco – Made in Italy and Culture.

This episode looks at what can be considered the quintessential Made in Italy product: the Italian language. The specific lens adopted is cinema given the fundamental role it plays in the diffusion of the Italian language abroad, or rather the Italian languages since Italian cinema agilely records regional dialects, foreign language interferences, as well as parlances used in specific job sectors or social circles. Most interestingly, the Italian language circulates on international screens through the voices of Italian actors thanks to the practice of subtitling, which ensures that dialogues are conveyed in their original forms in terms of pronunciation and inflection while being enriched by the body language of the actors. A non-Italian-speaking audience is thus exposed to the complexity of the Italian linguistic palette through a medium that in mirroring the country’s contemporary reality literally functions as a “sounding board” for the Italian language in ways that are more incisive than, for instance, opera whose Italian is less linked to today’s Italian, or theater which can be brought to foreign audiences much less frequently.

The choice of cinema for this event is linked to the theme of the 2017 Week of the Italian Language: “Italian at the cinema, Italian in the cinema.” The event is officially presented in connection to this initiative, which takes place every October worldwide as part of the Italian government’s efforts in the promotion of the Italian language via the Ministry of Foreign Affairs and International Cooperation.

Giuseppe Antonelli: “The Italian Language(s) of Cinema”
There are different ways in which the Italian language is used in movies, and world-renowned films like The Great Beauty by Paolo Sorrentino, Gomorrah by Matteo Garrone and Habemus papam by Nanni Moretti are perfect examples of this variety. Three different shades of the language for three different worlds: the one of power and success used in the capital, Rome; the mob-related one of Naples and the one that belongs to the Vatican and religion, which is almost an independent language. The same distinction applies to the three different traditions of the use of Italian language in movies: the one of aphorisms and sound bites, the one that is closer to local dialects, and the more refined and reflexive one. Using these movies as examples, the first half of the presentation will provide a quick linguistic map of today’s Italian cinema. The second part of the presentation will be dedicated to specific scenes from other films in which language becomes the protagonist in terms of vocabulary and grammar. The selection includes excerpts from Moretti’s Palombella rossa, neorealist films like Umberto D., comedies Italian style like We All Loved Each Other So Much, and the classic jokes by Totò and Fantozzi, among others. This all goes to show that, as stated by the protagonist of Leonardo Sciascia’s book A Simple Story, “The Italian language is not the Italian language: it is the act of reasoning in itself.”

Giuseppe Antonelli teaches Italian Linguistics at the University of Cassino, Italy. He writes for a number of newspapers and websites such as Corriere della Sera and Treccani.it (on their portal dedicated to Italian language). He was the anchorman of a radio show called “La Lingua Batte” on Radio Tre and since 2015 he has been telling the story of Italian words during the RAI 3 TV show “Il Kilimangiaro.” In 2003 his novel Trenità (Pequod) was nominated for the Premio Strega. Among his most recent works: Comunque anche Leopardi diceva le parolacce. L’italiano come non ve l’hanno mai raccontato (Mondadori, 2014); Storia dell’italiano scritto co-written with Matteo Motolese e Lorenzo Tomasin (Carocci, 2014); the Italian grammar L’italiano, gli italiani (Einaudi Scuola, 2016) co-written with Emiliano Picchiorri; and the essay Un italiano vero. La lingua in cui viviamo (Rizzoli 2016).

A dual citizen of the United States and France, Jerome Henry Rudes lives between New York City and Provence. Rudes is the 2014 winner of “La Médaille d’Or du Rayonnement Culturel” for the United States for his work in subtitling as well as his cross-cultural film curating after 25 years as President of the Avignon Film Festival. From 2002 to 2014, Rudes served as US Coordinator for LVT-USA, one of the world leaders in 35mm film and digital subtitling. In that capacity, Rudes supervised the subtitling of over 200 feature films and shorts, including scores of official selections for the Cannes, Berlin, Venice, Sundance, Locarno, Tribeca and Toronto Film Festivals. Rudes’ work has encompassed new titles as well as restorations. As of March 1, 2014, Rudes’ own company, Mistral Artist Management, took over all subtitling and captioning activity from LVT-USA. Currently, Rudes is working with UCLA Film Archive as well as with The Film Foundation.