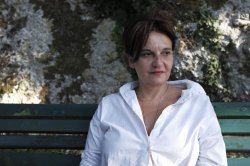 Sicily as a Theater of the World We are pleased to present a Skype conversation with internationally acclaimed and multiple award-winning director Emma Dante on the occasion of the U.S. premiere of her play Le sorelle Macaluso (The Sisters Macaluso).

Watch the trailer of Le sorelle Macaluso (with English subtitles)

The play brings to a summa Dante’s exploration of the dialogue between tragedy and comedy in its intense and refined treatment of family and death. Represented for too long as an enfant terrible in a country like Italy that considers even 40-year-olds still unripe, Dante has now reached a unique form of maturity that weaves together themes, sensibilities and influences that are as universal as they are local. In her work, Sicily, her (is)land of origin and a lush source of inspiration for her art, turns into a theater of the world. A place between geographies and civilizations, a light-filled space replete with shadows, a baroque corner plagued by paucity, Sicily — and in particular its capital, Palermo — is for Dante the home of a profoundly local humanity, often a vibrant lumpenproletariat. She delves in the dark meanders of this quotidian, through plays that explode into excess despite their minimalistic mise-en-scène and plots. To learn more about Emma Dante, read Dr. Fiore’s article on the 2017/18 Peak Performances Catalogue.

The conversation, moderated by Teresa Fiore, Inserra Chair in Italian and Italian American Studies represents a unique opportunity to learn about Emma Dante’s versatile career in theater, opera, cinema and literature. Two long-time members of Dante’s Compagnia Sud Costa Occidentale (Elena Borgogni and Sandro Campagna) will join the conversation in person. The event will feature excerpts from selected theater pieces, scenes from her movie Via Castellana Bandiera as well as an exchange focused on Le sorelle Macaluso, to be presented as part of the Kasser Theater’s Peak Performances calendar (November 16-19, 2017), which is fully devoted to women innovators and the gender gap in the arts.

The surtitles for Le sorelle Macaluso were actually developed as part of a Montclair State University project back in 2015, when the play was part of the EXPO calendar at the Piccolo Teatro of Milano, Italy. In a somewhat unforeseen turn of events, those very surtitles have “returned home” with the presentation of the play on campus. The story of how the English surtitles were produced by University student Marta Russoniello under the supervision of Marisa Trubiano and Teresa Fiore (Italian Program, Department of Modern Languages and Literatures) will be included in the program in order to highlight the pleasures and challenges involved in rendering into English a text written in Sicilian and Apulian dialects, which interestingly relegates Italian to a secondary role. Born in Palermo in 1967, Emma Dante explores the themes of family and exclusion through a poetics of tension and madness, imbued with tragedy and humor. Before becoming a well-known playwright and director, she received her diploma in 1990 at the Silvio D’Amico National Academy of Dramatic Art in Rome. In 1999, in Palermo, she founded the company Sud Costa Occidentale, with which she won the 2001 Scenario Prize for the show mPalermu and the Ubu Prize for Innovation. In the same year, she was awarded the Goffredo Fofi Lo Straniero Prize for a Young Artist. In 2003, she won the Ubu Prize for Best New Italian Play with Carnezzeria and in 2004, the Gassman Prize for Best Director as well as the Critics Award (National Association of Theater Critics) for dramatic art and direction. In 2005 she was awarded the Golden Graal Prize for Best Director for the play Verso Medea. She published Carnezzeria: Trilogia della famiglia siciliana with a preface written by Andrea Camilleri (published by Fazi), in 2007. Her first novel, Via Castellana Bandiera (published by Rizzoli, 2008), won the Vittorini and Super Vittorini Prizes in 2009. In the same year, she won the Sinopoli Culture Prize and opened the season at the Teatro La Scala of Milan with her setting of Bizet’s Carmen, directed by Daniel Barenboim. Between 2000 and 2010, the following shows were presented in Italy and abroad: mPalermu, Carnezzeria, Vita mia, Mishelle di Sant’Oliva, Medea, Il festino, Cani di bancata, and Le pulle. She is the author of two stories for children and adults, published by Dalai and adapted for the stage: Anastasia Genoveffa e Cenerentola and Gli alti e bassi di Biancaneve. January 2011 marked the beginning of an Italian and international tour of La trilogia degli occhiali, published by Rizzoli – it comprises three chapters: Acquasanta, Il castello della Zisa and Ballarini. In April 2012, she produced La Muette de Portici by Auber, directed by Patrick Davin, at the Opéra Comique in Paris. Photo credit: Carmine Maringola. Sandro Campagna graduated from the National Academy of Dramatic Art “Silvio D’Amico” in Rome and specialized in Stage Combat achieving the Level Three Certificate at the British Academy of Dramatic Combat in London. He collaborated with the National Academy of Dramatic Art as Assistant and Teacher for the Course of Movement and Scenic Combat directed by Master Francesco Manetti. In 2006 he met Emma Dante and joined her Compagnia Sud Costa Occidentale, which marked the beginning of a long-time collaboration. He is featured in the performances of Cani di bancata, Le Pulle, Verso Medea, Le sorelle Macaluso, and Bestie di Scena as well as in the film Via Castellana Bandiera. He worked as a Master of Stage Weapons and Choreographer for the Teatro alla Scala of Milan, the National Theater of Opera Comique in Paris, the Teatro di Roma, Teatro Argentina in Rome, Teatro San Carlo in Naples, Teatro Petruzzelli in Bari, Teatro Olimpico in Vicenza, Teatro Massimo in Palermo, and Teatro Regio in Turin. He is also a teacher at the School for the Performing Arts Crafts hosted by the Teatro Biondo Stabile in Palermo, and directed by Emma Dante.

Born in Siena in 1986 to a family of artists, Elena Borgogni joined – at the age of five – the theatrical activity of the international company Corps Rompu, directed by Maria Claudia Massari, and worked at national and European theatres and festivals. In 2008, she met Sicilian director Emma Dante, and she started an intensive path of study and work under her guidance. She acts in numerous plays directed by her, including Le Pulle, Carmen(conducted by Daniel Barenboim, for the opening of the 2009 season at La Scala in Milan), and La Trilogia degli Occhiali. She also plays the lead role in Verso Medea, with live music by the Mancuso brothers. She is Fenella, the mute lead, in the opera La Muette de Portici, first played at the Opera Comique of Paris in April 2012. While still involved in the Sud Costa Occidentale company directed by Emma Dante, she worked on the Strauss opera Feuersnot as assistant movement director, which opened the 2013/2014 season at the Teatro Massimo in Palermo, and in the same year she played the three lead characters of Tre Favole per un Addio. In Le Sorelle Macaluso, she plays the youngest sister, Antonella. She is part of Emma Dante’s latest creation, Bestie di scena, co-produced by the Teatro Biondo of Palermo, Il Piccolo Teatro of Milan and the Avignon Festival. Teresa Fiore is the Theresa and Lawrence R. Inserra Chair in Italian and Italian American Studies at Montclair State University. She is the author of Pre-Occupied Spaces: Remapping Italy’s Transnational Migrations and Colonial Legacies (Fordham UP, 2017) and the editor of the 2006 issue of Quaderni del ‘900 on John Fante. Her numerous articles on Italian American culture, migration to/from Italy, Sicilian culture, and 20th-century Italian literature and cinema appear in Italian, English and Spanish in both journals and edited collections. She coordinates a regular program of cultural events and educational initiatives on campus, through which she has also presented performances, workshops and talks linked to Italian theater and performances in a broad sense (Teatro delle Albe and the Mancuso brothers; Romeo Castellucci; Emio Greco; Karin Coonrod), also thanks to regular collaborations with Peak Performances/ACP at the Kasser Theater on campus.

‌Marisa Trubiano is Associate Professor of Italian at Montclair State University. Her current research projects include the translation of Flaiano’s theater into English. Il caso Papaleo (The Papaleo case) was published in the Journal of Italian Translation. Another translation project began in 2015, Translating Voices Across Continents, supervising students’ preparation of surtitles in English of a number of theatrical productions offered by the Piccolo Teatro di Milano on the occasion of Expo 2015, and has continued, with a number of operas for important venues such as the Teatro dell’Opera di Roma, Opera di Firenze and Maggio Musicale Fiorentino. This project, in partnership with Prescott Studio (Florence) and facilitated by the Inserra Chair in Italian and Italian American Studies, is part of a larger translating/titling initiative. Last year, she supervised a student cooperative education project, editing full translations and creating surtitles for a well-known Italian theater festival in New York, InScena!

*The Office of Arts and Cultural Programming (ACP) provides a place for important artists to create and perform innovative works. ACP produces and presents such works through its Peak Performances series to provide unique theatrical experiences that foster both creativity and learning for on-campus and community audiences over the academic year. Performing artists include members of the University campus from the Department of Theatre and Dance and the John J. Cali School of Music, as well as with established and upcoming creators on a national and international level.