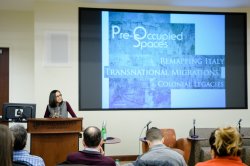 Pre-Occupied Spaces: Remapping Italy’s Transnational Migrations and Colonial Legacies is the title of a new book by Dr. Teresa Fiore (Inserra Chair in Italian and Italian American Studies at Montclair State University), published by Fordham University Press in May 2017.

By linking Italy’s long history of emigration to all continents in the world, contemporary transnational migrations directed toward it, as well as the country’s colonial legacies, Fiore’s book poses Italy as a unique laboratory to rethink national belonging at large in our era of massive demographic mobility. Through an interdisciplinary cultural approach, the book finds traces of globalization in a past that may hold interesting lessons about inclusiveness for the present. The book rethinks Italy’s formation and development on a transnational map through the cultural analysis of travel, living, and workspaces as depicted in literary, filmic, and musical texts. Such texts include, among others, Crialese’s film Golden Door, Lakhous’ novel Clash of Civilization Over an Elevator in Piazza Vittorio, Cavanna’s autobiographical book Les Ritals, and Calvino’s and Rodari’s short stories.

This panel will include a presentation by the author showing how immigration in Italy today is preoccupied by its past emigration and colonialism, and how the commonalities between the two phenomena can potentially dispel preoccupations. While focusing on the Italian case, the book offers interpretative routes about demographic and cultural movements that can be relevant to Europe at large as well as the U.S. Panel discussants coming from different disciplines will provide their takes on current immigration towards the E.U. and historical migration flows to the U.S. The panel will also address the acquisition and editorial process at Fordham UP thanks to the presence of its director as well as the coeditor of the series Critical Studies in Italian America, to which the book belongs.

Fredric Nachbaur is currently Director of Fordham University Press, publisher of scholarly books in the humanities and social sciences as well as trade books focusing on the metropolitan New York region. In addition to overseeing the operations of the press, he acquires in cultural studies, education, history, media and communication, religion, and urban studies. Nachbaur has close to 30 years of book publishing experience, the last twenty working with scholarly books. He got his start in publishing at John Wiley & Sons where he was marketing manager for professional and trade books. He made the foray into academic publishing by becoming the marketing director of arts and humanities at Routledge. Before taking the helm at Fordham, he was at NYU Press as the marketing and sales director. Nachbaur has a Bachelor of Arts in English from William Paterson University and a Masters of Art in Urban Studies from Fordham University.

Teresa Fiore is the Theresa and Lawrence R. Inserra Chair in Italian and Italian American Studies at Montclair State University, New Jersey, USA. The recipient of several fellowships (De Bosis, Rockefeller, and Fulbright), she was Visiting Assistant Professor at Harvard University, NYU, and Rutgers University. She is the editor of the 2006 issue of Quaderni del ‘900, devoted to John Fante. Her numerous articles on migration to/from Italy linked to 20th- and 21st-century Italian literature and cinema have been published in Italian, English and Spanish in both journals (as of recent Studi italiani in Florence and El hilo de la fabula in Argentina) and edited collections (Postcolonial Italy). Her book Pre-Occupied Spaces: Remapping Italy’s Transnational Migrations and Colonial Legacies was published by Fordham University Press in May 2017. In the same year two articles on the new migration flows from Italy to the U.S. (edited volumes by Routledge and the University of Illinois Press), and one on immigrant detention centers in Italy (Journal of Italian Media and Cinema Studies) are also due out. She coordinates a regular program of cultural events and educational initiatives on campus that focus on the circulation of people, ideas, products from/to Italy.

Nancy Carnevale is Associate Professor in the Department of History at Montclair State University.  She is the author of A New Language, A New World:  Italian Immigrants in the United States, 1890-1945, winner of a 2010 American Book Award.  Her articles and essays appear in academic journals including the Journal of Urban History, the Journal of American Ethnic History, and Frontiers: A Journal of Women’s Studies, as well as in edited collections, most recently, The Routledge History of Italian Americans(2017).  Her work has been supported by research fellowships from the National Endowment for the Humanities, the Rockefeller Foundation, and the Social Science Research Council/International Migration Program, funded by the Andrew W. Mellon Foundation.   She has served as historical consultant for exhibitions and other public history projects by organizations such as The Lower East Side Tenement Museum, the Princeton Historical Society, and The Filipino American National Historical Society/NJ Chapter.   ‌She is co-editor of Critical Studies in Italian America, a book series by Fordham University Press.

Stephen Ruszczyk is Assistant Professor in the Sociology Department at Montclair State University and teaches Social Problems and Foundations, Urban Sociology, Latino Sociology, and Immigration. He has three ongoing research projects. The first, which uses longitudinal ethnography, is a comparison of undocumented youths coming of age in Paris and New York and their local contexts of “illegality.” This project was supported by the “Settling into Motion” Bucerius Ph.D. Scholarships in Migration Studies and the Center for Latin American, Caribbean and Latino Studies of the City University of New York. Publications on this theme have appeared in American Behavioral Scientist and Migration Studies. The second, multi-method project compares the impact of organizations on the social lives of Dominican residents in Upper Manhattan and the West Bronx. A third project uses PAR methods to examine the process of participatory budgeting in Upper Manhattan City Council districts and public housing projects.

Tony Spanakos is Professor and Chair of Political Science and Law at Montclair State University. He is currently writing a book on domestic political change in Brazil and Venezuela and researching on the changes in global politics resulting from the emergence of countries like China and Brazil. His research has been published in Comparative Political Studies Latin American Politics and Society, Latin American Perspectives, and East Asian Policy, as well as other academic journals. He is the co-editor of Reforming Brazil (Lexington 2004) and Conceptualising Comparative Politics (Routeldge 2015) and a special issue on “The Legacy of Hugo Chavez” of Latin American Perspectives (2017). He is also the co-editor of the Conceptualising Comparative Politics book series for Routledge. He was a Fulbright Fellow (Brazil 2002, Venezuela 2008) and a Visiting Research Fellow at the East Asian Institute (2009).