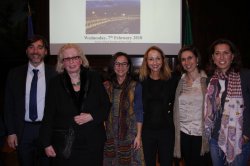 Opera at the Arena Sferisterio of Macerata: Accessible to All

Note: This is an off-site event held at the IIC of NYC

The Sferisterio Arena in Macerata, in the Marche region, has become a unique destination for opera lovers of all kinds thanks to its summer calendar of productions enriched by English and Italian surtitles, audiodescriptions, as well tactile experiences and sign language translation. This innovative program of accessibility offers free services to inter/national audiences and spectators with special needs both during the performance and backstage before or after the show. Located in a region with a long opera tradition, the Sferisterio has taken its mission to a new level and has therefore received much media attention and general recognition for its sensitivity to different needs (of the 31.000 spectators in 2017, over 300 took advantage of special services).

The production of materials in English (titles and audiodescriptions) is the result of a collaboration between the Macerata Opera Festival, the University of Macerata, and Montclair State University in New Jersey. The event includes an introduction to Macerata and its splendid arena as opera-imbued places during and beyond the festival, a presentation of the summer 2018 calendar, and an illustration of the special services the Macerata Opera Festival offers to its audience as part of student-faculty projects. The panel also features experts from the opera theater sector whose experience and perspective as directors and critics will enhance the exchange on such topical issues such as accessibility and translation of opera as part of the international promotion of Italian language and culture. Riccardo Lattanzi is the president of MIA, Marchigiani in America and an active ambassador of the culture of this region. He is an Associate Professor of Radiology, Electrical and Computer Engineering at the New York University, where he also serves as the Director of training for the Center for Advanced Imaging Innovation and Research. His research work lies at the boundary between physics, engineering and medicine. He investigates the interactions of radiofrequency electromagnetic fields with biological tissue to improve the diagnostic power of magnetic resonance imaging. He has received the ISMRM Rabi Young Investigator Award, an NSF CAREER award and a Fulbright scholarship, He was selected as Aspen Junior Fellow of the Aspen Institute Italia and Young Leader of the Council for the United States and Italy. Dr. Lattanzi earned a Laurea degree in electronic engineering from the University of Bologna, an M.S. in electrical engineering and computer science from MIT, and a Ph.D. in medical engineering and medical physics from the Harvard-MIT Division of Health Sciences and Technology. Silvia Carlorosi is Assistant Professor of Italian at Bronx Community College of CUNY. She is the author of A Grammar of Cinepoiesis: Poetic Cameras in Italian Cinema (Rowman and Littlefields, 2015), which analyzes the interaction between cinema and poetry, it considers how this poetic form differs from a cinema of narrative, and evaluates the modes of a lyric camera. Her interests include 20th century Italian literature and film, cultural studies, literary theory and philosophy, teaching pedagogy and study abroad. She has published various articles on Italian cinema, pedagogy and translation, both in English and in Italian, amongst which “Anomalie di valzer: un inedito musicale come commento storico nel Gattopardo di Visconti” (Cinema e Risorgimento: visioni e re-visioni: da La presa di Roma a Noi credevamo. Roma: Vecchiarelli, 2012). She is currently working as a co-editor and translator for a volume which collects the main works of a renowned scholar in Italian studies in the United States (Professor Emeritus Sante Matteo), and makes it available for the Italian public. Born and raised in Recanati (Macerata) in the heart of the Marche region, where she graduated from the University of Urbino, she is one of the founders of the MIA association. Committed to experiential learning, she directed and taught a Summer Abroad Program in the Marche region for students of Italian, and she organized and supervised students’ trips to Italy to visit hidden gems of the Adriatic coast. Elena Di Giovanni ‌is Associate Professor of English Translation at the University of Macerata, where she specializes in audiovisual translation and media accessibility, but also translation and writing in postcolonial settings and translation of audiovisual texts for children. From 2007 to 2010, she led the Italian research unit on audio description for the EU-funded project “DTV4ALL – Digital Television for All”. In 2012 and 2013, she has been the sole international investigator in the project “Translating Music”, funded in Great Britain by the Arts and Humanities Research Council, with a special focus on surtitling for operas and accessibility for the sensory impaired. Since 2008, she has been actively working for the provision of access to film, television, opera, theatre and cultural spaces in Italy, with over 100 events made accessible so far. Since 2008, she is coordinator of accessibility for the Macerata Opera Festival, where she leads teams of surtitlers and audio describers. Since 2008, she has been Visiting Lecturer at Roehampton University, London, UK, Masters’ Degree in audiovisual translation. Since 2013, she lectures on audiovisual translation and accessibility at the Venice Film Festival (Mostra Internazionale d’Arte Cinematografica di Venezia), within the European Parliament-funded LUX Prize for cinema (28 Times Cinema). She has been a translator and proofreader for the cinema, television, theatre and opera for 20 years.

Rosanna Coviello is double majoring in Italian and Jurisprudence at Montclair State University. In light of her interest for language and translation, she has been part of a number of collaborative projects during her studies, such as the first Summer Internship in Audiovisual Translation in Macerata, Italy in 2017 and the subtitling of Andrea Segre’s documentary Come il peso dell’acqua, screened as U.S. premiere on the MSU campus in the Spring of 2017.

‌‌‌Francesca Campagna is based in New York City and works as Artistic Consultant for theaters, performing art centers, artists and agencies based in Middle East, Europe and United States. Francesca has developed a global network of contacts in her field and specializes in creating joint ventures and co-productions, as well as special projects in opera, ballet, symphonic and world music. She is also a Guest Lecturer at the Accademia Teatro alla Scala in Milan for the Masters in Performing Arts Management program. In February 2016, Francesca was awarded the degree of Knight of Order of the Star of Italy given by the Italian Minister of Foreign Affairs for her outstanding contributions to the Italian Culture and Artists abroad. For the past 5 years, she was the Senior Artistic Manager of the Royal Opera House Muscat in the Sultanate of Oman. In this role, Francesca was a leading member of the team that produced over 80 events during the 9-month season. She was involved in every aspect of season development and long-term strategic planning of the theater. In 2002, Francesca began working with The Massimo Theatre in Palermo where she spent 5 years as Marketing Coordinator and 7 years as Executive Assistant of the Artistic Director. Since 2016 she has been Artistic Advisor for International Projects at the New York City Opera.

Manuela V. Hoelterhoff is a Pulitzer Prize-winning writer and editor whose wide range of interests includes music, art, travel, and architecture. Originally from Germany, Hoelterhoff received a MA from the Institute of Fine Arts at NYU. She has worked for The Wall Street Journal as arts editor, member of the editorial board, and music critic. She was the founder of Muse, Bloomberg’s arts and culture section, as well as its executive editor between 2004 and 2014. In addition to the Pulitzer Prize for Criticism, Hoelterhoff is the recipient of a Guggenheim Fellowship. The Carnegie Corporation included her in its 2014 list of notable immigrants. She was a founding editor of Conde Nast Traveler in 1987. The following year, she published Cinderella & Company: Backstage at the Opera With Cecilia Bartoli (Alfred A. Knopf), which was translated into French, German and Dutch. Anthony Tommasini, chief music critic of The New York Times, called it “The most perceptive and hilariously honest book on the making and marketing of opera to come along in some time.” “Modern Painters,” her libretto about John Ruskin – the Victorian tastemaker, early environmentalist and all around eccentric – was set to music by David Lang. The production was well received at its premiere at the Santa Fe Opera in 1995. Variety wrote: “Hoelterhoff finds dramatic substance in her material. She should be in line for another award with this cogently conceived, imaginative and historically correct libretto, her first opera book.” Her current book project is “Hitler’s Summer Seasons: How the Fuhrer Turned the World Into His Stage.” Teresa Fiore is the Theresa and Lawrence R. Inserra Chair in Italian and Italian American Studies at Montclair State University. She is the author of Pre-Occupied Spaces: Remapping Italy’s Transnational Migrations and Colonial Legacies (Fordham UP, 2017) and the editor of the 2006 issue of Quaderni del ‘900 on John Fante. Her numerous articles on Italian American culture, migration to/from Italy, Sicilian culture, and 20th-century Italian literature and cinema appear in Italian, English and Spanish in both journals and edited collections. She co-translated the experimental poetry collection edited by Renato Barilli Voyage to the End of the Word: The Intraverbal Research (San Diego State UP, 1997). Her upcoming annotated translation of Sherry Simon’s essay “German de Staël and Gayatri Spivak: Culture Brokers” will be published in the volume Donne in traduzione (Bompiani, 2018). She coordinates a regular program of cultural events and educational initiatives on campus, through which she has also presented performances, workshops and talks linked to the Italian performing arts in a broad sense (Teatro delle Albe and the Mancuso brothers; Romeo Castellucci; Emio Greco; Karin Coonrod; Emma Dante). She has been involved in the Italian Translation Curriculum, Grants and Internship Project at MSU since 2015.