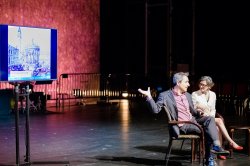 Venice as a Metaphor of the World: Otherness, Immigration, and Religion in Shakespeare’s The Merchant of Venice and in Today’s World

Karin Coonrod’s production of Shakespeare’s The Merchant of Venice at the Kasser Theater (September 19 – October 1, 2017) is the starting point for a conversation on immigration and religion as central issues in our contemporary world. Coonrod’s re-visioning of Shakespeare’s classic on the occasion of the 500th anniversary of the formation of the Venice ghetto stemmed from a desire to make the play speak to forms of otherness and exclusion across time and space. Focused on Coonrod’s own illustration of her project, its staging in the Venice ghetto and now its adaptation for the Kasser Theater, the conversation will also include presentations by Alessandro Cassin on the Jewish Ghetto in Venice, and by Teresa Fiore on immigration and exclusion as both general categories and specific practices.

This panel highlights the global relevance of Shakespeare’s play – recently described by Stephen Greenblatt as “a cure against xenophobia” (see article below) – and in particular of Coonrod’s approach to it, characterized by multi-lingualism and ethnic, racial, and gender diversity. The conversation aims at showing how at a time of socio-political uncertainty for the Western World in its experience of “the other,” the play as well as the Venice ghetto where it was staged have precious ethical and cultural lessons to share about human rights, and cross-cultural and interfaith dialogue. It is in this context that Venice can function as a metaphor of the world.

Teresa Fiore, Introduction: “Preoccupied about Space and Others: Calvino, Shakespeare and Today’s Im/Mobility”
Dr. Fiore will address the concept of immigration/exclusion/inclusion starting with Italo Calvino’s tale “All at One Point,” which in many ways served as an inspiration for her book Pre-Occupied Spaces. Her discussion will also incorporate wider considerations of today’s migratory flows and their regulation in order to reflect on the current representation of the “other” and the reactions it triggers at the local and global level (see VIDEO of a recent symposium on migration).

Teresa Fiore is the Theresa and Lawrence R. Inserra Chair in Italian and Italian American Studies at Montclair State University, New Jersey, USA. The recipient of several fellowships (De Bosis, Rockefeller, and Fulbright), she was Visiting Assistant Professor at Harvard University, NYU, and Rutgers University. She is the author of Pre-Occupied Spaces: Remapping Italy’s Transnational Migrations and Colonial Legacies (Fordham University Press, 2017) and editor of the 2006 issue of Quaderni del ‘900, devoted to John Fante. Her numerous articles on migration to/from Italy linked to 20th- and 21st-century Italian literature and cinema have been published in Italian, English and Spanish in both journals (as of recent Studi italiani in Florence and El hilo de la fabula in Argentina) and edited collections (Postcolonial Italy as well as the upcoming volumes on Italian Americans by Routledge and the University of Illinois Press). The regular program of cultural events and educational initiatives that she coordinates on campus also focuses on migrations at large.

Alessandro Cassin: “In and Outside the Venice Ghetto”
While the word ghetto was originally coined in Venice, it has come to be applied to several contexts over time and across space, including in the urban areas of the U.S. These contexts are profoundly different from the enclave formed in Venice and this presentation intends to take us back to the process of formation of the ghetto by illustrating the legal mechanism of management of the Jewish immigrants in Venice and the dynamic economic drives behind their regulated presence in the city. Mostly, it will highlight the forms of porosity between the city and the ghetto in the daily practices between locals and the newly arrived community.

Alessandro Cassin is Director of Publishing at Centro Primo Levi’s CPL EDITIONS and of the online magazine, Printed Matter. Coming from a tradition of publishing —his father’s Orion Press published the first edition of Levi’s If This Is A Man in English in 1959—Cassin began working in experimental theater and was awarded the Premio Ruggero Rimini 1989 for Il Presidente Schreiber. He has been a cultural reporter for publications including L’Espresso and Diario. He is a contributor of The Brooklyn Rail. His book Whispers: Ulay on Ulay co-authored with Maria Rus Bojan received the 2015 AICA Netherlands Award. He coordinated the publication of Lawrence “Butch” Morris’ The Art of Conduction, edited by Daniela Verenesi (Karma, 2017).

Karin Coonrod: “The Merchant of Venice in Venice… and in Montclair”
Coonrod will introduce Shakespeare’s play in its historical relevance and controversial interpretation and reception for its treatment of the “religious other,” in this case the Jewish merchant. She will then talk about the staging of the piece in the ghetto and the production in English and multiple languages featuring an international cast.

Karin Coonrod, who has been a faculty member of Yale School of Drama since 2002, is an internationally recognized theatre artist whose work has been lauded by The New York Times as “prodigiously inventive”; the New York Observer hailed her “clear-eyed imaginative intelligence.” She founded two acclaimed theatre companies: the Arden Party, which she ran from 1987 to 1997, and the international Compagnia de’ Colombari, based both in Orvieto, Italy, and New York City, which she established in 2003. Coonrod has directed numerous productions at the American Repertory Theatre, the New York Shakespeare Festival/Public Theater, New York University, and New York Theatre Workshop, among‌ others. Besides being a lecturer in the Directing Department at Yale School of Drama, Karin Coonrod has been a guest artist and teacher at Stanford, Harvard, Columbia, New York University, the University of Iowa, Fordham University, and the California Institute of the Arts.