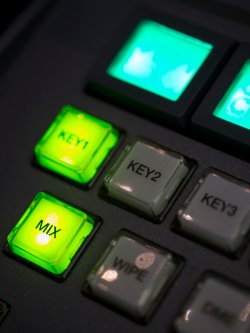 Great sound has the power to take us inside the experience — whether we are watching a film, television program, live theater, or enjoying music.

The BA in Television and Digital Media Program, Audio/Sound Design Concentration approaches the study of sound production as an interdisciplinary, multi-platform experience. The skill-based curriculum is designed to allow you to create compelling sound design for all forms of media as well as become proficient in audio production techniques. Coursework is complemented by hands-on work at the campus radio station as well as on various documentary, television, film, theatre and music projects. Internships at professional broadcast, post production, music and media companies are highly encouraged and strongly supported by the school.

What You Will Study

The Audio/Sound Design Concentration begins with theoretical and practical coursework in the physics of sound as well as studio operations, recording principles, mixing, editing and effects processing. As you progress through the program, you will create original sound design for broadcast, film, music, theatre and gaming projects.

Access to state-of-the-art equipment in the audio studios, radio station and DuMont Television Center will allow you to hone your expertise as you become skilled on audio equipment used in the industry today.

The curriculum for the BA in Television and Digital Media, Audio/Sound Design Concentration is comprised of 120 credits (3 cr. per course) and includes five areas of requirement:

For complete course requirements and descriptions, go to:

The U.S. Bureau of Labor Statistics offers very positive data for careers in communication and media, including those in sound engineering and related professions.

Below is a sampling of career titles in the industry:

Visit the links below for additional professional and career-related information: