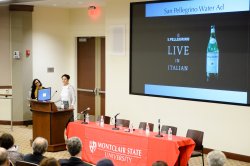 Come sta l’italiano? – The Present and Future of Italian Language and Culture Studies

Interest in Italy and its culture is only growing. The official data tell us that Italy is the second most popular study abroad destination for the U.S. after same-language UK, and the fifth most popular travel destination, as the country with the highest concentration of UNESCO sites in the world. “Made in Italy” continues to be a recognizable, respected, and sought-after brand globally, and an Italian lifestyle is a much coveted model for foreigners.

When it comes to a study of the Italian language, statistics seem to indicate that Italian is the fourth most studied language in the world. At the same time, Italian like most other foreign languages and the humanities in general, is not as attractive a subject for a university degree as it used to be in past, despite the fact that introductory and higher-level courses for adults and children appear to be expanding, both within and outside academia.

By bringing together a diverse group of experts ranging from professors to representatives of academic organizations and government institutions, the round table will offer an overview of the current situation and identify points of traditional strength that the field of Italian Studies can still leverage. Mostly, it will illustrate the new directions that this field has taken and continues to take in order to foster interest in the Italian language and culture in a structured and sustainable way, especially for areas like the metropolitan area of New York and the Tri-State that are so quintessentially Italian due to immigration flows, importation of goods (read the article), and cultural and artistic relations.

We are particularly pleased to present this program under the auspices of the Consulate General of Italy in New York at a time in which the further promotion of the Italian language and culture is at the core of its diplomatic mission, and represents a central issue of the national agenda in Italy as well.

Francesco Genuardi is an Italian diplomat with 23 years of experience in the field of International Relations. In March 2016 he has been appointed Consul General of Italy in New York, the most prominent consular position in the Italian diplomatic service, covering the States of New York, New Jersey, Connecticut, and Bermuda with a resident Italian Population of about 90,000 and more than 3 million Italian-Americans. From November 2014 and prior to his appointment to New York, he was at the Cabinet of the Minister of Foreign Affairs, Hon. Gentiloni, dealing with parliamentary relations. Between 2005 and 2014 he served at the Cabinet of the Foreign Minister, working with the succeeding Ministers in office. From 2002 to 2005 he was appointed Counselor at the Permanent Mission of Italy to NATO, where he was responsible, among other issues, for the relationship with the Press in Brussels and with the NATO Parliamentary Assembly. From 1998 to 2002 he served as Deputy Consul at the Consulate General in Buenos Aires, Argentina. He joined the diplomatic service in 1993, and between 1993 and 1998 he was at the General Directorate for Economic Affairs – where he dealt with international issues associated with environmental protection and safety – and at the Press and Media Office. Born in Brussels on July 7, 1967, he graduated in Law at the University of Milan in 1991.

Since 2014, Dennis Looney has served as director of the Office of Programs and director of the Association of Departments of Foreign Languages at the Modern Language Association of America. For the Office of Programs he oversees projects relating to the profession, such as departmental reviews, the ongoing examination of faculty rights and responsibilities, monitoring educational and curricular changes, and the development of statements of best practices. As director of ADFL, he oversees the Language Consultancy Service, the MLA Language Map, the language enrollment database, and other projects focused on languages other than English. From 1986 to 2013, he taught Italian at the University of Pittsburgh, with secondary appointments in classics and philosophy. He was chair of the Department of French and Italian for eleven years and assistant dean of the humanities for three years at Pitt. Publications include Compromising the Classics: Romance Epic Narrative in the Italian Renaissance (1996), which received honorable mention in the judging for the 1996–97 joint Howard R. Marraro Prize and Scaglione Award in Italian Studies from the MLA, and Freedom Readers: The African American Reception of Dante Alighieri and the Divine Comedy (2011), which received the American Association of Italian Studies Book Prize (general category) in 2011.

Professor of Italian in the Department of Italian Studies at Wellesley College, David Ward is author of four books: A Poetics of Resistance: Narrative and the Writings of Pier Paolo Pasolini (1995); Antifascisms: Cultural Politics in Italy, 1943-46 Benedetto Croce and the Liberals, Carlo Levi and the Actionists (1996); Carlo Levi: Gli italiani e la paura della libertà (Milan: Rizzoli/Nuova Italia (2002) and Piero Gobetti’s New World: Antifascism, Liberalism, Writing (2010). Professor Ward was awarded a National Endowment for the Humanities Fellowship in 1999, and currently serves as one of the Directors and Co-Editor for Reviews of the Journal of Modern Italian Studies. He teaches across the whole Italian Studies curriculum, from beginning and intermediate levels to advanced courses. As Chair of the Department of Italian Studies, he has supervised the development and implementation of Wellesley College’s online Italian language courses.

Lucia Pasqualiniis currently the Head of office for the Promotion of Italian Language abroad at the Ministry of Foreign Affairs and International Cooperation in Rome. She graduated Summa cum Laude in Political Science from “La Sapienza” University in Rome in March 2000 and entered the Italian Foreign Service in December 2002. She served as Second Secretary at the General Directorate for European Affairs, Russia and the former USSR countries Desk (2002-06), as Chief of Staff to the Ambassador of Italy in Beijing (2006-10) and as Deputy Consul at the Consulate General of Italy in New York (2010-14). Since her tenure in New York, she has focused on the promotion of the Italian language through different projects ranging from the creation of a portal that will be launched in October 2016 to the assignment of recent Italian graduates in Teaching Italian as a Second Language to thirty university campuses around the world, and various professional development activities for Italian teachers abroad. She is an advocate of bilingual programs in public schools, and has supported the creation of a pilot program in New York (Brooklyn). She has illustrated these projects on a number of TV programs, especially “Community” of RAI Italia.