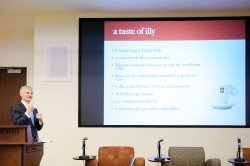 Critical Made in Italy Part 2: Food

This is the second event of the “Critical Made in Italy” series, designed by the Inserra Chair in Italian and Italian American Studies and inspired by a 2016 collection of essays edited by Daniele Balicco – Made in Italy and Culture.

The association between Italy and food has only strengthened in the past couple of decades, especially outside of Italy. While the range of offerings in terms of regional culinary traditions, chefs’ techniques and approaches, as well as restaurant formats continues to expand, it is the innovation that Italian food has brought and continues to bring to the debate about food in general that is at center of this conversation with experts in the field. In addressing the issue of sustainability, our guests will show how this innovation stems from a philosophy of production and consumption that promotes environmental consciousness via the adoption of ancient as well as cutting-edge biotechnologies. Through select examples related to policies implemented in Italy as well as the practices that Italian companies adopt abroad, the speakers will show how the Made in Italy style in food has impacted the ways we think about food in our contemporary world. The conversation aims at bringing together people active and interested in Italian culture as well as nutrition, business, biology, environmental issues, among others.

Andrea Illy is the Chairman of illycaffè‌, a coffee company with a distinct focus on sustainability, which was included in the Ethisphere Institute list of the World’s Most Ethical Companies. He is also the Chairman of Altagamma Foundation, the Italian luxury brand committee that embraces over one hundred Made-in-Italy companies. A chemist by training with an Executive MBA from the Bocconi University in Milan, he joined the family company illycaffè‌ in 1990, almost sixty years after its foundation. As CEO between 1994 and 2016 he turned the company into a global brand. He has chaired a variety of organizations and served on prestigious boards in the field of sustainability and coffee science over the years, while also receiving major recognitions (2004 Business Man of the Year – Ernst & Young Italia). An enlightened manager combining sophisticated research activity with original product enhancement policies, he has spearheaded the opening of the University of Coffee at illycaffé and served as one of the Ambassadors of 2015 Expo in Milan. A published author on the topic of coffee, Andrea Illy is a supporter of the arts and an advocate of intellectual exchanges on social, aesthetic and political issues.

Daniele Balicco is Visiting Fellow in Theory and Critical Studies at the EHESS (École des Hautes Etudes en Sciences Sociales) of Paris. His theoretical work lies between cultural history, aesthetics and economics. In his first book – Non parlo a tutti. Franco Fortini intellettuale politico/I Don’t Speak to Everyone. Franco Fortini, a Political Intellectual (Roma, 2006) – he analyzed the relationship between political power, the aesthetic dimension, and financial capital. He has continued to focus on this topic as the editor of a special issue of Allegoria (2014) devoted to Edward Said as a political thinker – Lotta politica e riflessione estetica in Edward Said / Edward Said between Politics and Aesthetics. These themes are also central to his more recent work as editor of the volume Made in Italy e cultura. Indagine sull’identità italiana contemporanea (Made in Italy and Culture. Inquiry into the Contemporary Italian Identity, Palumbo 2016). He is author of articles on food such as Rivoluzione Macrobiotica (see pdf), Rivoluzione policolturale, sfida al deserto del Gobi and ‌of an essay in book on alternative agriculture, Le tre agricolture. ‌He also works as a freelance journalist for the newspaper Il Manifesto. He lives in Rome.

A native of Rome, Maurizio Forte graduated with a Degree in Agriculture with maximum credits and a Master in Political Science – International Politics – with honors. He began his career in 1984 at ITA/Italian Trade Commission Headquarters in Rome, where he served until 1996 in technical and promotional activities in food and agriculture sector and promotional activities in major equipment-manufacturing sectors. In 1996 he was posted to serve as the Deputy Trade Commissioner at ITA’s Shanghai Office. In 2000 he returned to Rome as an Executive to direct the Food and Agriculture Department. In 2004 he was appointed Director of ITA/Italian Trade Commission in Shanghai where he served until 2013. He subsequently directed the ITA Office in Moscow as the Executive Director for the Russian Federation, Armenia, Belorussia and Turkmenistan. Since May 2015 he is the Director for ITA/Italian Trade Commission in New York and the Executive Director for the ICE USA offices.