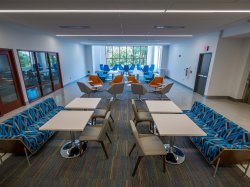 Steve Rosenbaum is founder and CEO of Magnify.net, a platform company that allows publishers, brands, and Web communities to embrace Web content with aggregation, curation, and user contributions. Rosenbaum has been working with Curated Content since he created the groundbreaking hit MTV UNfiltered in the pre-Web days. Since then, he’s been a storyteller, filmmaker, and executive at media and Web properties. He’s produced films for HBO, A&E, National Geographic, CNN, MSNBC, and Discovery.

Harvard professor, activist and author Lawrence Lessig participated in a panel discussion on April 23 at Montclair State University with Merrill Brown,  SCM director, and Brigid Harrison, Professor of Political Science and Law at the University.

Paula Kerger is president and CEO of PBS,  the nation’s largest non-commercial media organization with more than 350 member stations throughout the country. Kerger joined PBS as its sixth CEO in March 2006, and has since made particularly strong commitments to the arts, news and public affairs, high-quality content for education, diversity and the use of new technology to bring public media into the lives of all Americans.

Brian Storm is founder and executive producer of the award-winning multimedia production studio MediaStorm, based in Brooklyn, N.Y. MediaStorm publishes diverse narratives on the human condition, offers advanced multimedia training seminars and collaborates with a diverse group of clients ranging from international corporations to individual photojournalists and artists.

Moderated by Marc Rosenweig, SCM’s assistant professor of Television and Digital Media, the panel will be comprised of three sports journalists and will explore the challenges of covering baseball in a changing media age. The panel guests are Paul Hagan; Russ Salzberg; and Jeff Bradley. This event is co-sponsored by SCM and the Yogi Berra Museum and Learning Center.

John Del Cecato,  a partner at AKPD Message and Media, was responsible for writing, directing and producing many of President Obama’s nationally broadcast television ads – including several spots that internal research found to be the most effective of the presidential campaign.

Montclair State University hosted New Jersey’s first ever journalist-tech hackathon, titled “Hack Jersey.” One-hundred participants from the New Jersey and New York area signed up to compete in the sold-out event. Hack Jersey – sponsored and hosted by the NJ News Commons at Montclair State University, in partnership with Knight-Mozilla Open News – is a 24-hour competition, allowing groups of journalists and software coders to team together to create original projects that could transform the way New Jersey residents use data and experience news. Each project was presented to an all-star panel of four judges from the news and technology industries and graded based on specific criteria.

SCM’s Television and Digital Media unit recognized Ian Eagle from CBS Sports and the YES Network and Bruce Beck from WNBC-TV with the school’s Allen B. Du Mont Broadcaster of the Year Award. Eagle and Beck spoke about their sports media careers and answer questions.  A special edition of “Carpe Diem” was produced .

November 12, 2012 – Post-election Panel Forum: “Campaign Reporting in the 21st Century – What Can Be Learned from the 2012 Election”
(Experts in Media Forum Speaker)

Collaborating for the first time, news organizations across New Jersey, led by Montclair State University’s NJ News Commons,  monitored voting problems throughout the state and identified potential polling issues brought on by the damage of Superstorm Sandy. The numerous media partners include NJTV, New Jersey Public Radio, WHYY, WBGO, NJ Spotlight, NJ.com, Patch, NorthJersey.com, Baristanet, My Verona NJ, Elizabeth Inside Out, Glocally Newark, Hoboken Mile Square View, and Jersey Shore Hurricane News.  Students from the School of Communication and Media monitored a hotline during polling hours through which voters were able to report any voting problems, which were communicated to the news collaborative as they developed.

Emmy-award-winning producer and president of CBS News from 1996-2005, Andrew Heyward is an adviser on digital media and strategy and nationally recognized expert on news innovation. Before his tenure as CBS president, Heyward was executive producer of The CBS Evening News (1994-1996). Heyward was also responsible for developing and launching 48 Hours, the weekly primetime CBS News series that premiered in January 1988. He has won 12 national Emmy Awards.  To launch the Experts in Media Forum, Heyward will be interviewed by SCM Director Merrill Brown in a discussion open to the campus community.