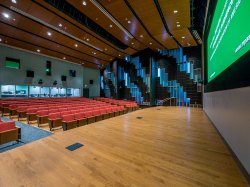 Montclair’s own Beverly Peterson is currently working on two documentaries one is a transmedia project about the devastating impact of Workplace Bullying and the other is about Maria Martin’s ground breaking work to train indigenous Mayan journalists in Guatemala who risk their lives to link their remote communities to the global dialogue. She’ll tell us about shooting in Guatemala and having her documentaries broadcast internationally, and screened at major festivals including; HBO, PBS The Sundance Channel, The Sundance Film Festival, Human Rights Watch, Museum of Modern Art, Brooklyn Museum of Art, The Walker Art Center, The Warhol Museum, and The Kitchen!

Jack Sholder is a director best known for his work in the horror film genre, notably Alone in the Dark, A Nightmare on Elm Street 2: Freddy’s Revenge, The Hidden, and Wishmaster 2: Evil Never Dies. In 2002, Jack directed Beeper, a thriller starring Harvey Keitel and Joey Lauren Adams that was shot in India. And in 2003 he directed Twelve Days of Terror for Fox Television Studios, a fictionalized account of an infamous series of shark attacks that took place in New Jersey in 1916.

Antonino Pasquale D’Ambrosio is an Italian-American author, filmmaker, producer and visual artist. D’Ambrosio’s feature film  LET THE FURY HAVE THE HOUR was an Official Selection of the 2012 Tribeca Film Festival featured in the festival’s Spotlight section where the high-profile films screen and we will be showing it! It was selected as one of the 10 Best Films of Tribeca Film Festival. Executive Producer Mark Urman will also be in attendance. Panel discussion to follow.

Got his start shooting, directing, and editing the documentary STREET FIGHT, which followed Cory Booker’s first run for mayor of Newark, NJ. STREET FIGHT won the Audience Awards at the Tribeca Film Festival, AFI/Discovery SilverDocs Festival, and Hot Docs Festival. It also received the Jury Prize for Best International Documentary at Hot Docs and was nominated for a Writer’s Guild of America (WGA) Award. The film went on to be nominated for an Academy Award and an Emmy.

Sara Driver is an independent filmmaker born in Westfield, New Jersey. She produced two early films for the well-known Director Jim Jarmusch, helping him to gain international attention and success. Driver made her directorial debut in 1981 with YOU ARE NOT I and continued on to direct Sleepwalk, and the award winning WHEN PIGS FLY (1993), which will be shown.

Nancy Savoca is one of the leading independent directors in the U.S. Her 1989 film True Love was hailed as “one of the 50 greatest independent films of all time” by Entertainment Weekly. Household Saints (1991) and Union Square (2012), among other films, reveal her skill in designing Italian American characters and stories that transcend common clichés. The conversation at Montclair State University will focus on the history of Italian Americans in film and the place of contemporary directors within it, especially with an eye towards the future. In-progress, completed, or planned projects will be discussed through selected film clips. More information coming soon.
Sponsored and organized by the Inserra Chair in Italian and Italian American Studies(Department of Spanish and Italian) at Montclair State University. Co-sponsored by the Film Program, School of Communication & Media

Ira Sachs will be showing his award winning film “Keep the Lights On” on November 13th. His film premiered at Sundance last January and won the grand jury award at Outfest among other awards. Mr. Sachs is a curator of the monthly series Queer/Art/Film at the I FC Center. Keep the Lights On chronicles an emotionally and sexually charged journey of two men in NYC through love, friendship, and addiction.

Chris Newman is a sound mixer and director. His film credits include The Godfather, Amadeus, The Exorcist, The Silence of the Lambs, and The English Patient among a host of others. He is a three time Academy Award winner for Best Sound and was nominated for five more in the same category. Newman currently resides in New Jersey.

Mustapha Khan is an Emmy Award-winning film and television director. His latest project, Rocksteady is a coming of age independent feature about an aspiring stock car racer in upstate New York. A Rastafarian-infused, feel-good movie. Rocksteady won the Best Picture Award at both the 2011 Litchfield Hills Film Festival, and at the 2011 Jamaica Reggae Film Festival, where Khan also won the Award for Best Director. Rocksteady is currently playing nationwide on-demand.